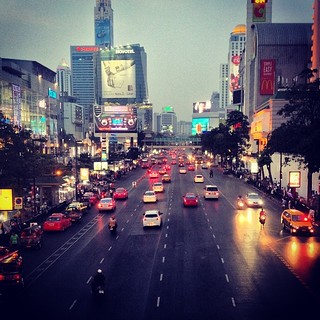 For the third time on this trip, we returned to Bangkok for one final stay. Ignoring any guest houses we stayed at the Sivali Place apartments located south of the Chao Phraya river for a bit of space and luxury during our final week. Annie loved the fact that she could get out of bed, walk down the stairs and have a clean 25 meter outdoor pool for a morning swim.

The city has good transport, along with the Chao Phraya Express Boat that Annie previously talked about, there is a vast Skytrain that runs above the streets covering the roads in concrete pillars. It’s great to use, has a smart card system and more importantly air conditioning, which made getting about so much easier. The only issue we had was our fancy apartments were a good three kilometres from the nearest stop, we knew this and accepted it as a trade off. The hotel staff were happy to call a taxi, but being frugal travellers (it was only about £1.20) we were happy to walk along, save a bit of money and see the city.

Bangkok is incredibly hot, I would say after months and months of sun and humidity we should be acclimatised but that would be wrong; walking to the skytrain I sweated so much my grey t-shirt was soaked looking like I just came from a gym. Looking around, the locals are all bone dry, they obviously know better and avoid the midday sun and excessive walks. 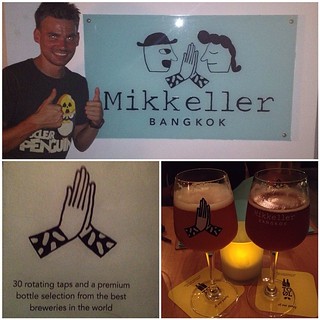 It’s been a very long time since we have had good beers, it’s not impossible to find some German and Belgian beers in Asia but they are normally three times the price of anything local. I go out my way to avoid Chang, the local Thai beer which is strong and terrible. Singha is the slightly more expensive option which is far from great but fills a gap. Doing some research on beers in Bangkok I was surprised to see that a new bar from Danish brewers Mikkeller had just opened, the city being as big as it is means it was 14k away from our hotel, but surely worth a visit. Using the directions we took the skytrain as close as possible and wandered around what looked like a residential area, wondering if I got my directions wrong. Overhearing someone else ask if the bar was nearby, we found the strange house with large beer garden awaiting with 30 craft beers on draft, heaven. The downside of such a range of great beer is that pints started at 300 baht (just over £5.50) and even cheekier, the “small” at 150 baht was a tiny glass which looked like it held about 200ml – forget that. It was definitely an expat hangout, good to try a bunch of beers but way too expensive for another visit, back to the Singha then. 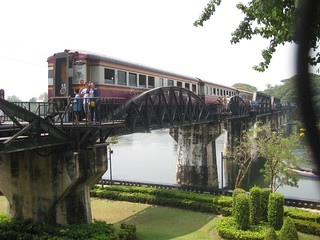 A trip out to see the bridge over the “River Kwai” was on our lists to do, wanting to avoid tour groups we got up early and headed down on the world slowest train, which lacked any sort of facilities including Air Con, it was hot and a bit boring. Three hours later the train arrived, leaving us four hours to wander around and visit the war museum. All very interesting to read about how the railway was built by prisoners of war captured by the Japanese, how many people died in the horrendous conditions and how it fared during the constant bombings during World War 2. We aimed to get the train back later in the afternoon but managed to negotiate a super comfy taxi to take us all the way back to Bangkok which seemed like utter luxury after that train journey. 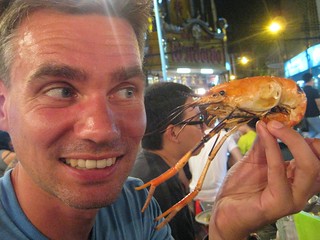 To sample more of the city, we booked on a slightly expensive walking food tour of Chinatown. It turned out just to be us and the tour guide, no need to fight for attention then. Wandering around the busy streets we went to six places to try all sorts of local food of various tastes. Annie did her best to pass over as much as she could to me, normally a good thing but these flavours did not go down that well. A bowl of noodle soup with liver, tongue, stomach and heart was one of the more memorable choices, it was a chore to get through one bowl never mind two.

A final day of travelling was spent soaking up the city, we decided to get Thai massages and spent a while walking around looking for a good place that wasn’t a brothel behind closed doors (the guidebook helped us figure out what was what). A Thai massage isn’t quite as relaxing as I expected, lying down your legs are bent, arms are stretched, knuckles are cracked and pressure points are pushed. I was concerned that I would fart during some of the moves, which may have been awkward! It was an interesting hour and we both came out unharmed, bonus.

And that’s the end of our travels! Six fantastic months, thirteen countries, across three continents stopping in about sixty cities and towns was never going to be easy, but well worth the effort. Was it perfect? No we made made a few mistakes with our flight bookings, flying in and out of places that didn’t make sense and some of our routes overland were not the most direct – all very easy to reflect on with hindsight.

We really only briefly sampled some of the countries, Chile and Japan come to mind, and missed out on others altogether due to lack of time, Central America and India both look fascinating and will be visited at some point.

Now back to home for some Irn Bru, Haggis and Shortbread!