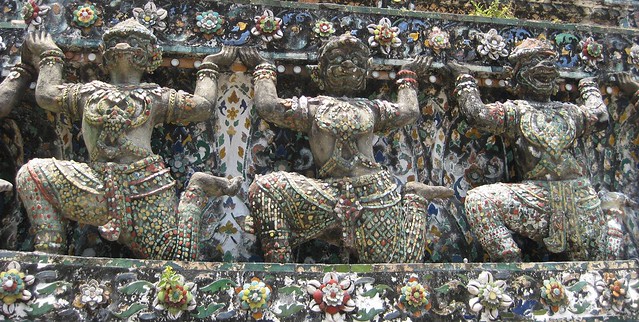 I arrived in Bangkok a little doubtful of whether I’d like it, but as soon as we got off the bus I was taken in by the city. There is so much happening you don’t know where to look, with constant noise and bustle and life.

Our first night was a Saturday, and so we decided to go to nearby Khao San Road, which is the famous backpacker district. It’s basically a street taken over by fast food chains and pubs, bars, clubs, all claiming to offer ‘the strongest and cheapest cocktails’. In theory, it should have been horrible, but it is enchanting, and you could spend hours sitting out on the tiny chairs watching life go by. There are endless street hawkers dropping by, selling all kinds of tat, including ping pong shows, insects to eat, and most memorably, a variety of friendship bracelets with really vulgar statements stitched in. We couldn’t fathom who on earth would ever buy one, but they must sell, because they were all over the place. 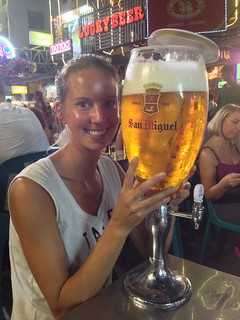 After getting some delicious street food, for a laugh we opted for a pub whose USP was not asking for ID. Exactly what we needed, obviously, despite being nearly double the age of all the other customers. Paul then decided that it would be fun for us to get a 6 pint giant beer, and that was our first night in Bangkok complete.

Bangkok is an absolutely massive city. I’m usually a fan of walking, but when what looks like a short walk on the map turns out to be an hour long trek along motorways, you need to think again. One of the easiest public transport options is the express boat which travels up and down the Nam Chao Phraya river, which chops the city in two. Despite the fact it’s basically a bus on water, it is so much fun to travel on, with the added game of avoiding any river water getting on you, as it’s filthy. The drivers come flying up to the stops and then crash against the side, with passengers then getting a short window to hop on and off before it speeds off again. It also costs peanuts, with a one way ticket less than 20p, putting Scotrail to shame. 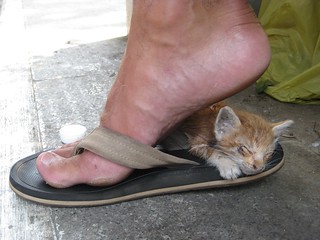 We only had a couple of days in Bangkok on this stop, but as we knew we would be back to fly home, we didn’t try to cram too much in. We did visit a couple of temples, including Wat Pho, which has an impressive giant reclining Buddha on show, and one of the many huge shopping malls in the business district. At one of the temples we came across a stray kitten hiding underneath a street bench. It was absolutely tiny, and appeared to be on the edge of death. We tried to feed it milk but it was only interested in being close to us, in particular Paul’s foot, maybe it missed company. If we were at home, the kitten would have been coming with us, no question, but as it was we had to leave it to fend for itself. I’m not too optimistic about its chances.

As we were both so taken with the city, and had managed to find a lovely hotel/apartment with an outdoor pool, we decided to spend more time here at the end of the trip to enjoy more of what Bangkok had to offer. But for now, good bye Bangkok, we’ll be back.